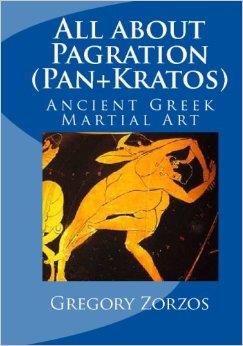 The ancient Hellenic martial art of Pammachon is the fighter that flights to win in two Olympic games (pigmi, wresting, pagration). The one part of Pammachon is known in many names today such as: Pangkration, Pancraio, Paradosimos, Pankration, Pancratium, Pangratius, Pankration, Pancrace, Pankratos, Pancrazio, Pagration, Pangration, Sanda etc. Research includes many ancient scripts from ancient texts from many countries and many archaeological items from many places. The analysis proved that all modern martial arts of the world have their roots from the ancient Hellas. Some parts of Pankration consists today’s martial arts such as Grabble Submission, tug-of-war, sumo, kickboxing etc. and the author has wrote some specific books on this parts of Pankration.