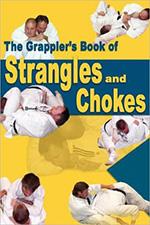 THE GRAPPLERS BOOK OF STRANGLES AND CHOKES

In The Grappler’s Book of Strangles and Chokes, Steve Scott makes it easy to learn the most effective and popular chokes and strangles of modern grappling. For those new to grappling, he begins with the basics of gaining control, including the key points of controlling your opponent’s body by controlling his neck. Then he teaches you over a hundred chokes and strangles organized into four broad categories: naked strangles and chokes, trap chokes and strangles, label strangles and chokes and triangle chokes and strangles. Coach Scott wraps up with effective defenses you can use to prevent your opponent from applying a choke or strangle to you. This book is a comprehensive, in-depth look at chokes and strangles that really work in gi and no-gi combat sports, allowing you to use them in a wide variety of situations, including self-defense and street applications. Every set up, application, variation and defense has been used successfully in all levels of competitive judo, submission grappling, sport jujitsu and mixed martial arts. A skillfully applied choke, strangle or “sleeper hold” will take even the biggest toughest opponent. Like they say; “What you see is what you get.” And what you get is a book on some of the most effective ways of strangling opponents in any form of personal or sport combat.