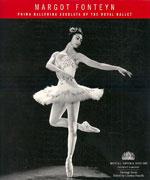 Margot Fonteyn is The Royal Ballet’s legendary Prima Ballerina Assoluta, and the company’s first ‘home grown’ ballerina. Frederick Ashton’s first muse, her lyrical style and innate grace were illuminated in the many ballets he created for her. Her Princess Aurora in The Sleeping Beauty reopened the Royal Opera House in 1946 and confirmed The Royal Ballet as the major classical ballet company in the UK. It was also the role in which she conquered American audiences when The Royal Ballet first appeared in New York in 1949.

This book brings together for the first time over 120 images which chart the whole of Fonteyn’s career with The Royal Ballet from 1934 until her last appearances in galas in the 1980s. This is the second of a series of books in the Royal Opera House Heritage Series, featuring a unique collection of images from the Royal Opera House Archives.